How Android Builds Work in Bazel

In Bazel, BUILD files in directories specify targets that can be built from the contents of those directories.

Each Bazel target is defined by a rule, which specifies inputs, outputs, and how to get from one to the other. Rules can specify things like creating an executable binary or defining a library. In Bazel’s code, individual rules are represented by instances of implementations of RuleConfiguredTargetFactory. Users can also extend Bazel and create new rules with Skylark.

During analysis, Bazel runs the rules for each target being built and their transitive dependencies. Each rule generates and records all the actions it depends on. Bazel won’t necessarily run all of those actions; if an action doesn’t end up being required, Bazel will just ignore it. Skyframe is used to evaluate and cache the results of rules.

Information from the rules, including artifacts representing the future output of actions, are made available to other rules through the rules’ providers. Each rule has access to its direct dependencies’ providers. Because most information passed between rules is actually transitive, providers make use of the NestedSet class, a DAG-like data structure (it’s not actually a set!) made up of items and pointers to other (nested) NestedSet objects. NestedSets are specially optimized to work efficiently for analysis. For part of a provider that represents some transitive state, for example, a trivial implementation might be to build a new list that contains the items for the current rule and each transitive dependency (for a chain of n transitive dependencies, that means we’d add n + (n - 1) + … 1 = O(n^2) items to some list), but building a nested set containing the new item and a pointer to the previous nested set is much more efficient (we’d add 2 + 2 + … 2 = O(n) items to some nested set). This introduces similar efficiency in memory usage as well.

There are a few important kinds of rules when building code for Android:

One way in which the Android library build process differs from the normal Java build process is Android resources. Resources are anything that’s not code - strings, images, layouts, and so on.

Bazel generates R.java files (as well as related R.class and R.txt files) to contain references to available resources. These R files contain integer resource IDs that developers can use to refer to their resources. Within an app, each resource ID refers to one unique resource.

Developers can provide different versions of the same resource (to support, for example, different languages, regions, or screen sizes). Android makes references to the base resource available in the R files, and Android devices select the best available version of that resource at runtime.

Resource processing with aapt and aapt2

Next, the serialized resources are merged with similarly serialized resources inherited from dependencies. Conflicts between identically named resources are identified and, if possible, resolved during this merging. The contents of values resource files are generally explicitly merged. For other files, if resources from the target or its dependencies have the same name and qualifiers, the contents of the files are compared and, if they are different, a warning is produced and the resource that was provided last is chosen to be used.

Finally, Bazel checks that the resources for the target are reasonable and packages them up. In the aapt pipeline, the validate action calls into the aapt package command, and in the aapt2 pipeline, the aapt2 link command is called. In both cases, any malformed resources or references to unavailable resources cause a failure, and, if no failures are encountered, R.java and R.txt files are produced with information about the validated resources, and a Resource APK containing those resources is produced.

Using aapt2 rather than aapt provides better and more efficient support for a variety of cases. Additionally, more of the resource processing steps are handled by aapt2 as opposed to Bazel's custom resource processing tools. Finally, since the serialized format can be understood as-is by future calls to aapt2, Bazel no longer has to deserialize information about resources to a form aapt2 can understand.

The resource ID values generated for android_library targets are only temporary, since higher-level targets might depend on multiple targets where different resources were assigned the same ID. To ensure that resource IDs aren’t persisted anywhere permanent, the R files record the IDs as nonfinal, ensuring that compilation doesn’t inline them into other Java code. Additionally, an android_library's R files should be discarded after building is complete.

(Even though android_library files are eventually discarded, we still need to run resource processing to generate a temporary R.class to allow compilation, to merge resources so they can be inherited by consumers, and to validate that the resources can be compiled correctly - otherwise, if a developer introduces a bug in their resource definitions, it won’t be caught until they’re used in an android_binary, resulting in a lot of wasted work done by Bazel.)

Code in android libraries and binaries make references to code in the R files, so the R.class file must be generated before regular compilation can start. For android_library targets, since all resource IDs are temporary anyway, we can speed things up by generating a R.class file at the end of resource merging. For android_binary targets, we need to wait for the output of validation to get correct resource IDs. Validation does produce an R.java file, but generating an R.class file directly from the contents of the R.txt file is much faster than compiling the R.java file into an R.class file.

The android_binary rule includes optional resource_configuration_filters and densities fields. These fields limit the types of devices that will be built for. For example, if you only wanted to build for English-language devices with HDPI displays, you could specify:

Bazel will now be able to skip unneeded resources. As a result, the build will be faster and the resulting APK will be smaller. It won't support all kinds of devices and user preferences, but this speed improvement means developers can build and iterate faster. 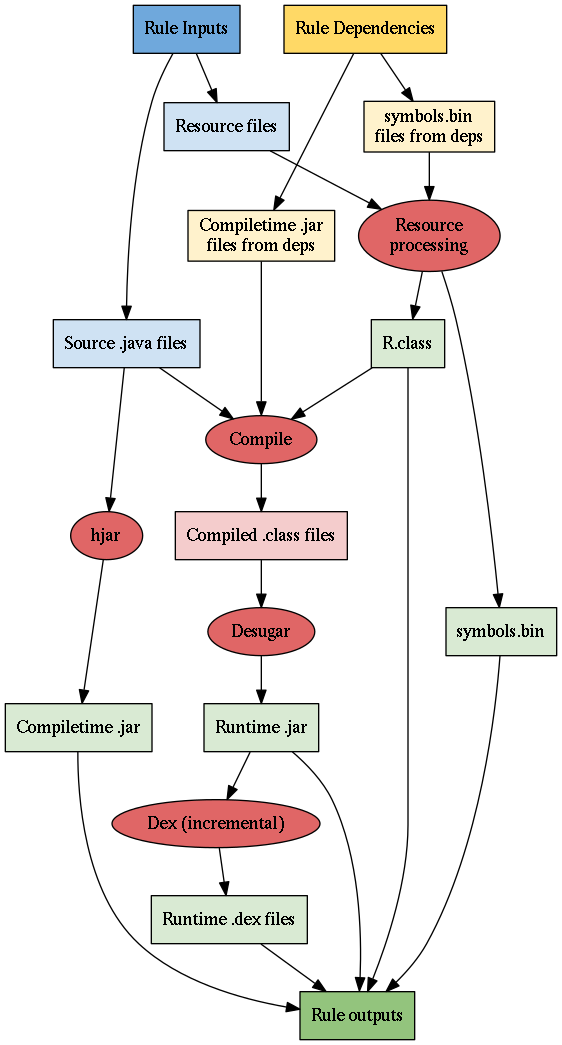 An android_library rule is a pretty simple rule that builds and organizes an android library for use in another Android target. In the analysis phase, there are basically three groups of actions generated:

First, Bazel processes the library's resources, as described above.

Next comes the actual compilation of the library. This mostly just uses the regular Bazel Java compilation path. The biggest difference is that the R.class file produced in resource processing is also included in the compilation path (but is not inherited by consumers, since the R files need to be regenerated for each target).

Finally, Bazel does some additional work on the compiled code:

An android_binary rule packages the entire target and its dependencies into an APK. On a high level, binaries are built similarly to libraries. However, there are a few key differences.

For binaries, the three main resource processing actions (parse, merge, and validate), are all combined into a single large action. In libraries, Java compilation can get started while validation is still ongoing, but in binaries, since we need the final resource IDs from validation, we can't take advantage of similar parallelization. Since creating more actions always introduces a small cost, and there's no parallelization available to make up for it, having a single resource processing action is actually more efficient.

Bazel also links together compiled C and C++ native code from dependencies into a single .so file for each CPU architecture specified by the --fat_apk_cpu flag.

The merged .dex files, the .so files, and the resource APK are all combined to build an initial binary APK, which is then zipaligned to produce an unsigned APK. Finally, the unsigned APK is signed with the binary's debug key to produce a signed APK. 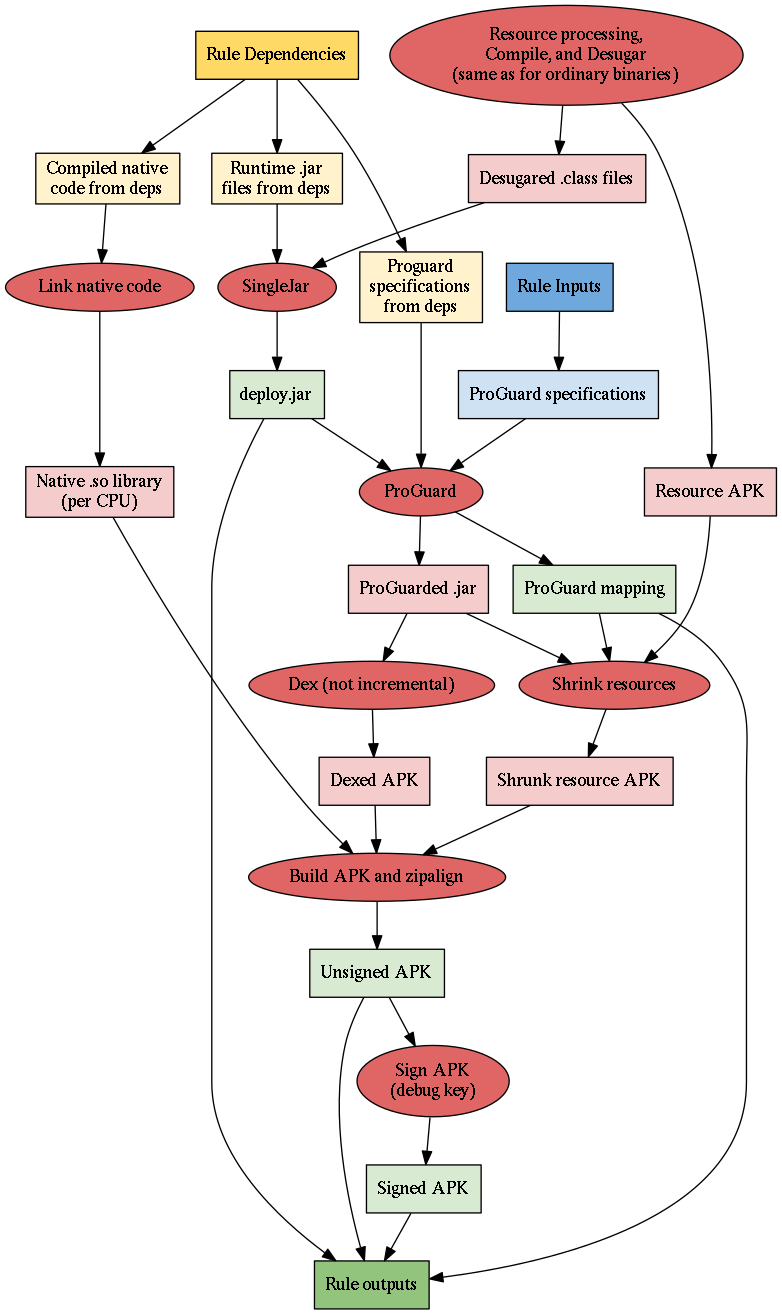 Based on information from a series of Proguard specifications (from both the binary and its transitive dependencies), ProGuard makes serveral passes through the deploy.jar in order to optimize the code, remove unused methods and fields, and shorten and obfuscate the names of the methods and fields that remain. In addition to the resulting proguarded .jar file, ProGuard also outputs a mapping from old to new names of methods and fields.

ProGuard’s output is not dexed, so when building with ProGuard, the entire .jar must be re-dexed (even code from dependencies that were dexed incrementally). The dexed code is then built into the APK as usual.

ProGuard will also remove references to unused resources from the class files. If resource shrinking is enabled, the resource shrinker uses the proguard output to figure out what resources are no longer used, and then uses aapt or aapt2 to create a new, smaller resource APK with those resources removed. The shrunk resource APK and the dexed APK are then fed into the APK building process, which operates the same as it would without ProGuard.

Mobile-install is a way of rapidly building and deploying Android applications iteratively. It’s based off of android_binary, but has some additional functionality to make builds and deployments more incremental.